U.S. Customs and Border Protection has issued a statement warning Internet users of their liabilities when purchasing certain goods from overseas suppliers. More often, we are hearing of items (potentially used for shoplifting) being seized, such as the detacher hook or magnetic pocket detachers.

On its website, U.S. Customs and Border Protection states;

“When goods move from any foreign country to the United States, they are being IMPORTED. There are specific rules and regulations that govern the act of importing – and they can be extremely complex and confusing – and costly.”

Using very clear and an increasingly authoritarian tone, they go on to state;

“When you buy goods from foreign sources, you become the importer. And it is the importer – in this case, YOU – who is responsible for assuring that the goods comply with a variety of both state and federal government import regulations.”

Two of the most important points that our readers should be concerned about are:

So, if you’re not a shopkeeper, and you shouldn’t be in possession of these items, then you certainly should not be importing them. We advised our readers in a post on August 12, 2012, to avoid the issue altogether by purchasing from reputable USA based sellers. By doing so you avoid any permit issues and will not have your shipment scrutinised by a U.S. Customs and Border Protection agent who has the power to seize your goods and notify any relevant authority.

In the security tag removal industry there are a lot of fly-by-night scams, so we tend not to review new vendors the moment they appear, because they are often shut down soon afterwards (the last being shopliftinggear.com). However, recently, we’ve discovered one that has been registered for over a year. It’s origins are a little mysterious, so we’ve enjoyed uncovering the who and what during this investigation.

The website known as detachershop.com is operated by a Chinese distributor, posing as a US based seller. They have also operated other websites (e.g. tag-remover.com) which have disappeared after bad reviews and warnings of intent to scam. On their current homepage there is a heading indicating they ship the few items they sell from Philadelphia, but we discovered that all of the items actually ship from China. If you fail to notice this message on their checkout page, you’ll be waiting a couple of months for your item, if you’re lucky enough to get it at all. 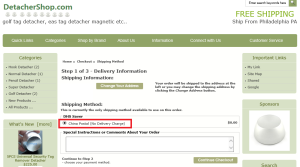 The name of this Chinese distributor is Jimmy Yang of Shenzhen Unitoptek Electronics Co Ltd, better known as Unitoptek. He, or they, operate an account on what we consider to be a high risk website, Aliexpress. Like other sellers on Aliexpress, Unitoptek pose as manufacturers but are merely intermediaries (middle men) passing on their mark-up. Furthermore, the goods they sell are not OEM, but generic in design, and statements about the strength of their magnetic detachers should be taken with a pinch of salt.

The domain name detachershop.com was registered July 10, 2012. The store contains four items for sale, but it’s unclear how one is supposed to pay for them. We attempted to make a purchase, noting that the website displayed Google Checkout (now defunct for tangible goods) and PayPal. It’s possible their PayPal account has been terminated (or ‘permanently limited’ if we’re to use correct terminology), or they may have decided to stop taking payments. Unfortunately, we can’t pinpoint from what time this may have occurred.

We recommended that people use caution when visiting the detachershop.com website. Most of its content is plagiarised, including all of its images and much of the product descriptions. Also, the telephone number listed diverts to a Google Voice voicemail, and we were unable to reach a human being on all of our attempts. Worst of all, the buyer runs the risk of authorities or customs either seizing or tracing the items to addresses located in the USA. We’ve discussed this issue before and hence always recommend that buyers stick to using local, reputable sellers, thereby avoiding customs and the hassle of returning faulty or fake goods to another country.